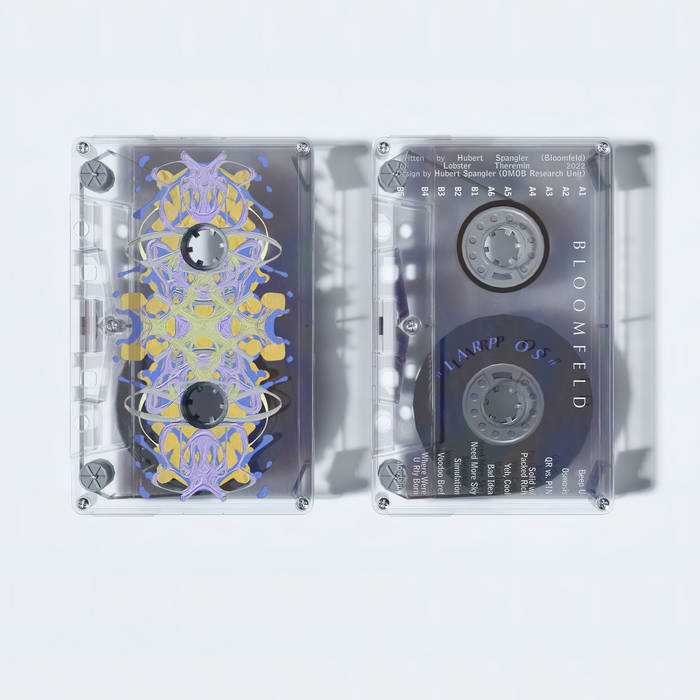 Following a debut Berghain performance and Rinse FM Culture vs Reality residency, Overthinker Mob founder Bloomfeld prepares the genesis of his digital art renaissance. Meeting at the intersection of ethno-futuristic braindance and hedonistic club heat is LT-BlOOM-01, the artist's debut on Lobster Theremin and a release that marks new sonic territory for the important UK label.

As the founder of Overthinker Mob research label, the Berlin based artist has “rejected conventional formats for releasing music” (FACT Mag) by “putting out unfinished or overthought music from artists anonymously” (Resident Advisor), compiling “a diverse range of anti-ego club tunes and sombre atmospheres'' (Electronic Beats). While allowing for the heads to over-intellectualise, Bloomfeld’s output often exposes what comes out of the speakers as just wiggly hair. After all, existence is a cosmic joke.

“My debut release is an introspective work documenting some of the characters I slipped into since my teenage years,” he says. “It’s named LARP OS - LARP being short for live-action role play - because role-playing is how I interact with my environment. And how everyone else does.”

“For my part I am blessed with the ability to distinguish and compartmentalise the characters I adopt to navigate my circumstances, and I have a strong bond with all of them.”

Glueing together the personas that live inside the creators skull, LARP OS is a deconstructed trip through trap-laden hi-hats, screw-face grime and IDM-electronica that walks the tightrope between functional and malfunctioning. ‘Beep U’ kicks things off with a melting cut of 140bpm fuck-step; weightless, slow-mo atmospherics give off a vintage music-box vibe that when blended with pitched vocal samples is reminiscent of the golden-years of Plata, Mssngno and those artists associated with emo, R&B-laden electonica.

‘Osmosis’ maintains the grimey aesthetic and sky-rockets it into the time-ahead; a future-facing cut of vibrant melodies and distorted basslines that do not sound unlike the excellent, mind-bending productions of Strict Face. With gun-shot samples a-plenty, it’s as tropical as it is dark.

That darkness is followed on ‘Solid’; a wub-driven cut of underground bass-weight that sounds like it was taken straight out of a Mumdance set. Squelching slime, stabbing lasers and scattered breaks make for a gritty and raw experience, before that ‘Everyday I’m Hustlin’ energy comes through on ‘Yeah, Cool’; Memphis-trap elements and old school arcadia rolling around the broken soundscape.

Much like Loraine James’ excellent Reflection, the A-side comes to a close with zero-gravity basslines and Sonic The Hedgehog-like samples that sound like an old gaming machine is being sucked through a black-hole, before the B-side begins and the future-dancehall riddims of ‘Need More Sky’ play out.

Staying true to its ethos of not being over-thought, ‘Simulation’ and ‘Voodoo Bref’ capture the delicate essence of chaos, beauty and nuance - elements essential to each character that we shapeshift into in our short time on this rolling planet.

‘Where Were U Rly Born’ is an emotional piece of wordless social commentary subtitled by glitching kicks, emo-atmospherics and protest, defiant-like energy, while ‘Mondaigai’ hears the cries of one-more-tune before ending on a devastating cut of distorted, hip-hop fused dub.